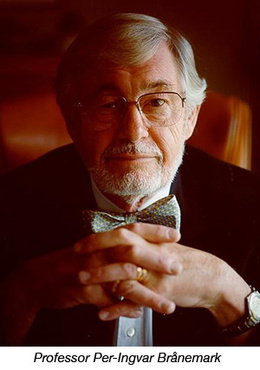 Implant dentistry is the youngest subspecialization within the field of dentistry, however, it is now more than fifty years old. In general, it specializes in the replacement of lost teeth by implants which become a fixed part of teeth.

First attempts to replace missing teeth date back to antient Egyptian and South American civilizations. At that time patients’ teeth were replaced with shaped ivory or wood. In the 18th century, teeth from other human donors were but implant procedures were almost always unsuccessful due to strong immune system reactions of the recipients.

In the 19th century, experts succeeded in producing and applying gold and platinum implants and conducted many experiments to help to develop implant therapy. However, from the perspective of a long-term success they all failed in the practice. The first successful implant treatment is attributed to Dr. Strock who presented it at Harvard University in 1937. His implant was made from vitallium (alloy of cobalt, chromium and molybdenium) and after its application Dr. Strock did not report any postoperative complications or unwished reactions of the patient’s immune system.

Since the mid-50s of the 20th century research and development in implant dentistry has significantly boosted up. A breakthrough came in 1952 when a rsearch group headed by Swedish doctor  Per Ingvar Brånemark successfully placed a titanium metal roller into femur bone of rabbit. Based on this experiment they found that bone is able to not only accept a foreign body but it can even fuse with the surrounding bone. The researchers called and presented this phenomenon as „osseointegration”. Along with the research the Brånemark team was developing a cylindrical titanium screw with a specific surface. Brånemark’s research, however, did not meet with confidence among scientists and a real milestone in implant research became the year 1981 when the Brånemark‘s team published the results of their long-term research. Therapy with dental implants was accepted and appproved in North America in 1982.

Since 1980s many companies have been developing research in the field of implant dentistry. Many advances have been made in the construction and design of implants, however, all of them are more or less similar to the original Brånemark titanium screw.

Implant dentistry is a very specific subspecialization of dentistry. Its main principle is to follow a highly individual approach since advances and procedures in implant dentistry cannot be generalized. Every dental implantologist must approach every patient as a fully unique case. There is a great number of both different implants as well as suitable and appropriate procedures. It is essential to draw up a fully custom made implant therapy plan for each patient.